Erik Martin (TD, l’Unithéâtre/La cité francophone) rounded up a group of technicians for the first annual (or multi-annual?) Techsplosion event. Workshop West was gracious enough to donate their unused theatre time to allow us technicians to just play!

The goal was to bring ideas we wanted to try in a theatre space, and start playing.

By the end of the 3-day experimental time, we had built an inflatable cube, some light painting software, audio-to-light software, camera control software, played with different projection materials and control (including an iCue!), and overall just had too much fun. On Friday evening we invited some theatre friends to come by and take a look at what we were up to, and hopefully inspired a few more ideas. Thanks to everyone who helped out, looking forward to next year!

Micro PCs in the theatre

This year as my final project towards my degree in Technical Theatre, I chose to examine how Micro PCs and other embedded technologies can be used in the theatre.

The final report ended up being a general survey of these compact technologies, rather than a specific case study. It summarizes many different experiments I’ve played with in the past year, and hypothesizes how technologies might be used in a proposed production of R.U.R at the U of A. (Stay tuned, this production may come to life this fall!)

Be sure to check out the PDF Download of my report. You may find some ideas of your own to experiment with! I look forward to trying out some of these techniques on productions in the future. 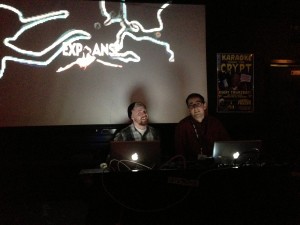 Elijah and I (of ShowStages) were invited to add video to the Expanse Cabaret event at New City Legion for this year’s Expanse festival. The variety show was part of the Expanse Movement and Dance festival, Presented by Azimuth Theatre.

The cabaret event featured a high-energy performance by Mark Mills, with a variety of dance and dramatic performances throughout the evening. 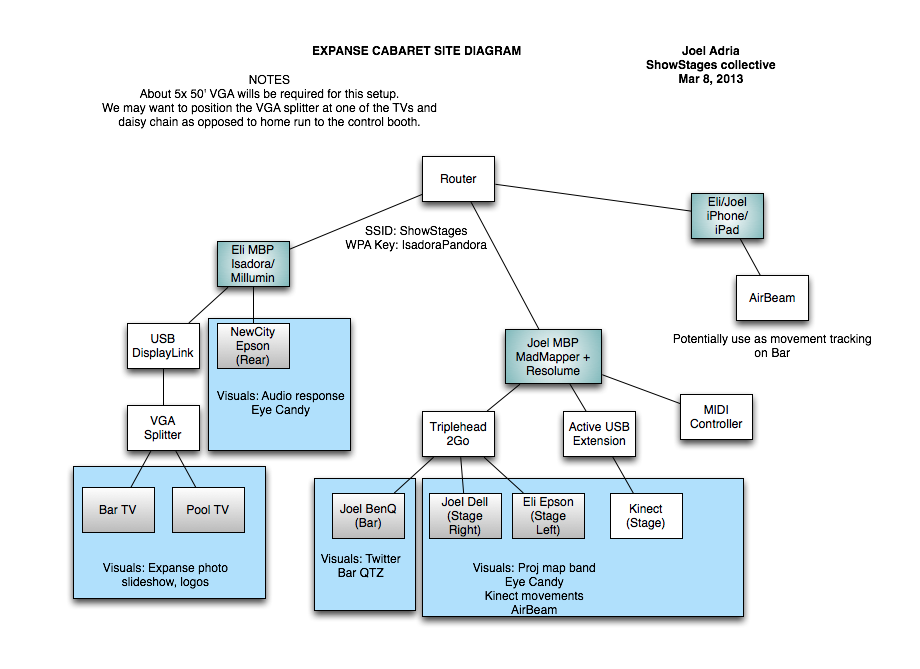 For outputs, we had access to New City’s existing gear, plus our own arsenal of projectors and equipment. This worked out to be:

With that many outputs, we needed to stretch the capabilities of our two MacBook Pros, with just one output each. On my system, I ran our TripleHead2Go to power two projectors pointed cross-shot on the stage. The third output powered a projector near the bar that beamed a steady stream of tweets across the bar top. 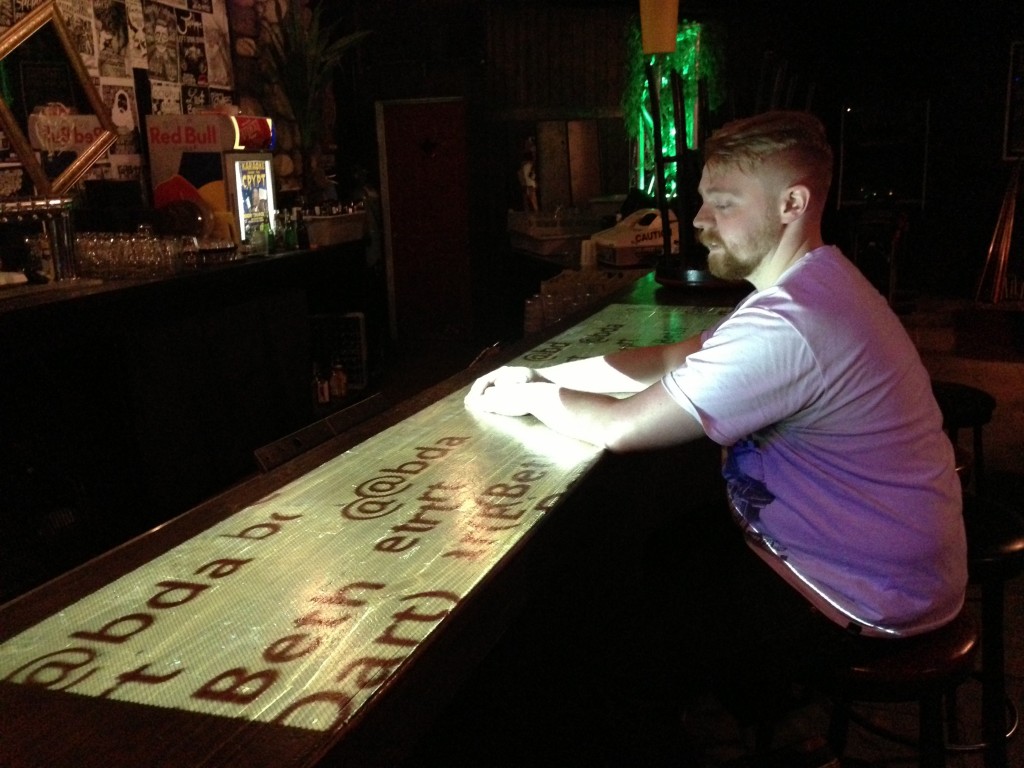 On Eli’s machine, we ran the projection screen straight out of the MBP, and used my USB DisplayLink to get an extra out. We mirrored this channel to power both TVs with the same content. The USB adapter performed like a champ, with no glitches or noticeable lags with the content we were giving it. 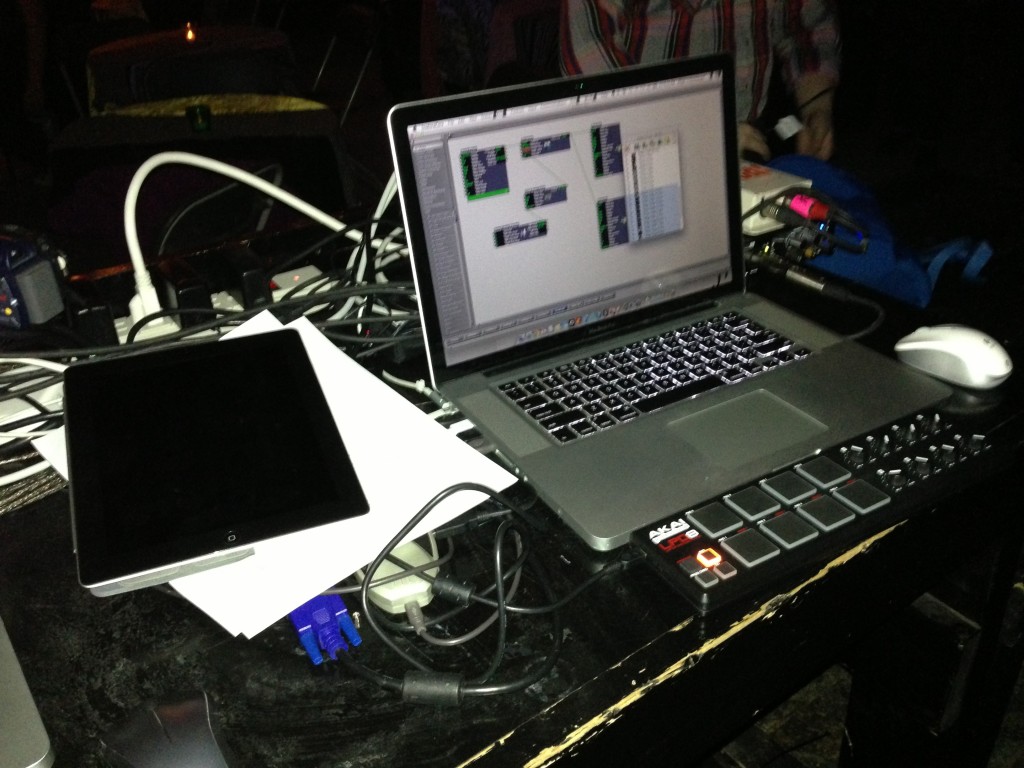 We ran VGA for all sources, which took the bulk of our setup time. Hopefully we can work towards cutting this time down with VGA extenders or a road case rig.

We really wanted to put our MadMapper rig to good use on this show. The angle that we projected the Twitter bar from was really awkward: a steep upside down diagonal. It wasn’t ideal, but it was a convenient placement and got the messages across. MadMapper got it setup in no time at all. 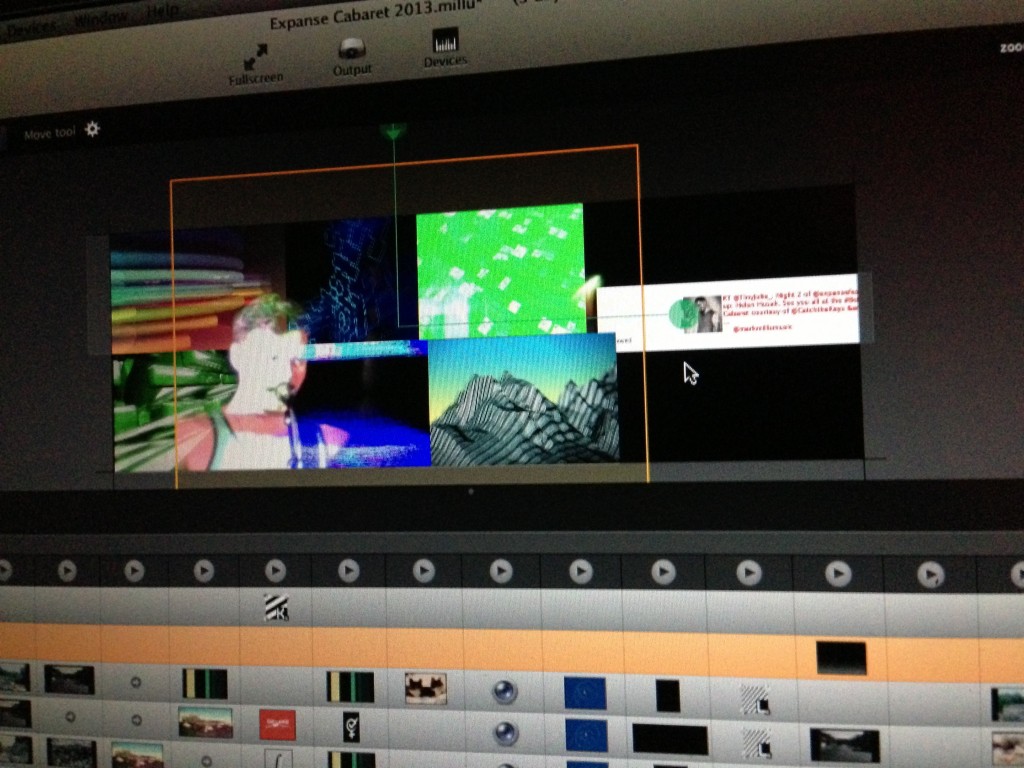 The other two projectors beamed onto each side of the stage. I mapped out a few amplifiers, the walls, and some picture frames we whited out with a few old posters. The response was great, with one person even asking if we had mounted screens in the walls. The low light combined with the decent res of the Dell made for a great map.

For playback, Eli took to our friend Isadora, running the TVs and screen as two stages. For a portion of the event, we were asked to include a remote performance by the Good Women Dance group, which was beamed in over FaceTime as they performed pieces in various locations along Whyte avenue. To maintain a clean look for the screen, we used a MaxMSP patch that siphoned the output of FaceTime into Isadora. It was a bit clunky, occasionally flashing the wrong portion of the screen when FaceTime auto-rotated with the remote iPhone. (We later found an alternative in VDMX, later…) 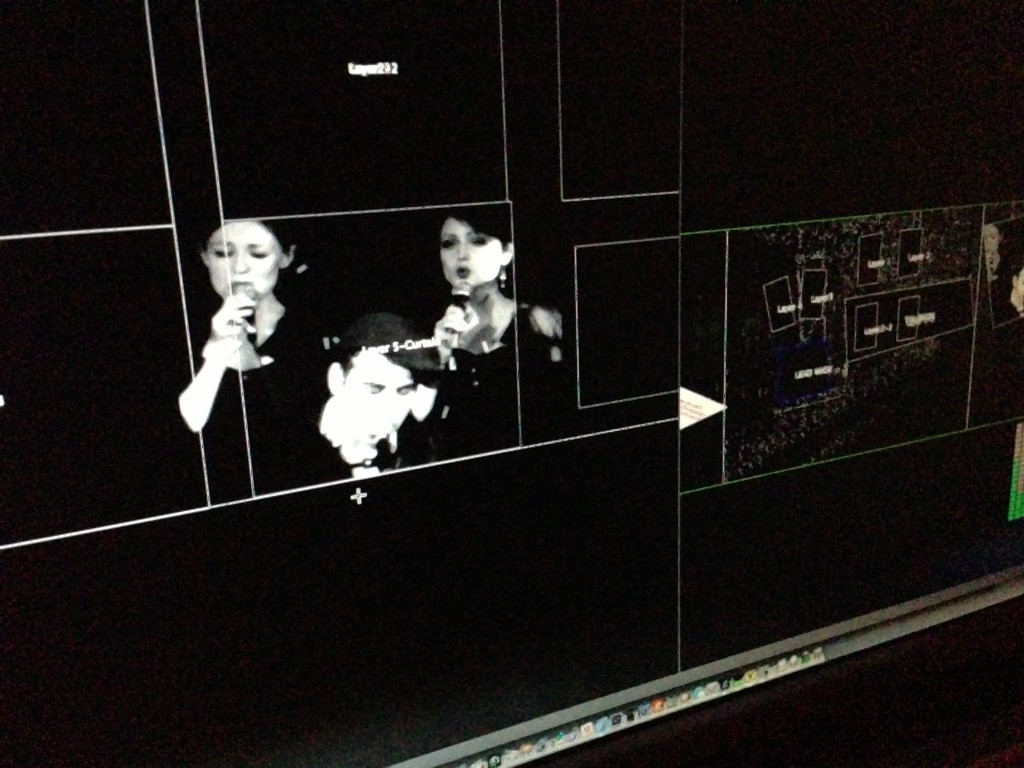 Originally I wanted to use Eli’s license of Resolume Avenue for playback on my computer, but not having too much experience with it, I opted to use the last few days of my Millumin trial for the event.

It was a real winner for its ability to arrange different setups and recall them quickly, while also being able to arrange the layers into 6 different media positions in MadMapper. It was also great at normalizing different content sizes, all while keeping the Twitter bar running on the side. It even brought in a live video feed from an old Mini DV camera I brought on a whim, which turned out to be a killer effect.

Where Millumin fell down was its inline effects (or lack thereof). There are a few built-in essentials, like color adjustment and soft crop that are great for everyday use. However, they aren’t easily adjustable on the fly for multiple layers unless you MIDI map each layer. Millumin’s author has assured me that custom effects will likely be in its way, as custom Quartz filters could be fairly easily implement in the video pipeline.

The wicked Dart Sisters of Catch the Keys Productions asked us to stick around for the second event of the Expanse festival Saturday night, featuring amazing spoke word artist C. R. Avery.

With a chance to do it all over again with a bit of a sense of what helped with a live video performance, I decided to grab a license of VDMX for the second night. I had used VDMX years ago before they redesigned it, and knew how powerful it could be for a setup like the Expanse Cabaret. The great folks at VIDVOX were prompt in getting me a student discount, and I was up and running for sound check. 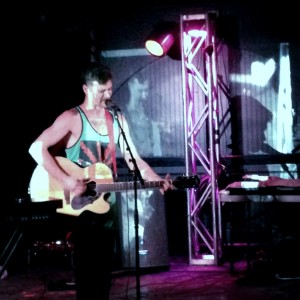 I had some trouble getting the video layers to the right size and crop method that Millumin did so easily, but I marched into the darkness with VDMX and some revised video mapping areas for the new sets. It was a bit of a struggle to get where I wanted to go with VDMX, mostly because I hadn’t established much of a “rig”, which VDMX users are famous for building.

By the end of the night, I had discovered some need built in filters and effects, and was mixing in live video like I had in Millumin. Although we had no FaceTime to syphon in this night, VDMX has a great window capture system that allows you to grab any open (or hidden) window as a video source.

I’m looking forward to experimenting with VDMX, and building a custom rig for future events like this, and possible theatre applications.

With some great effects achieved with live video layering into our content, we’ll definitely be playing more with that. 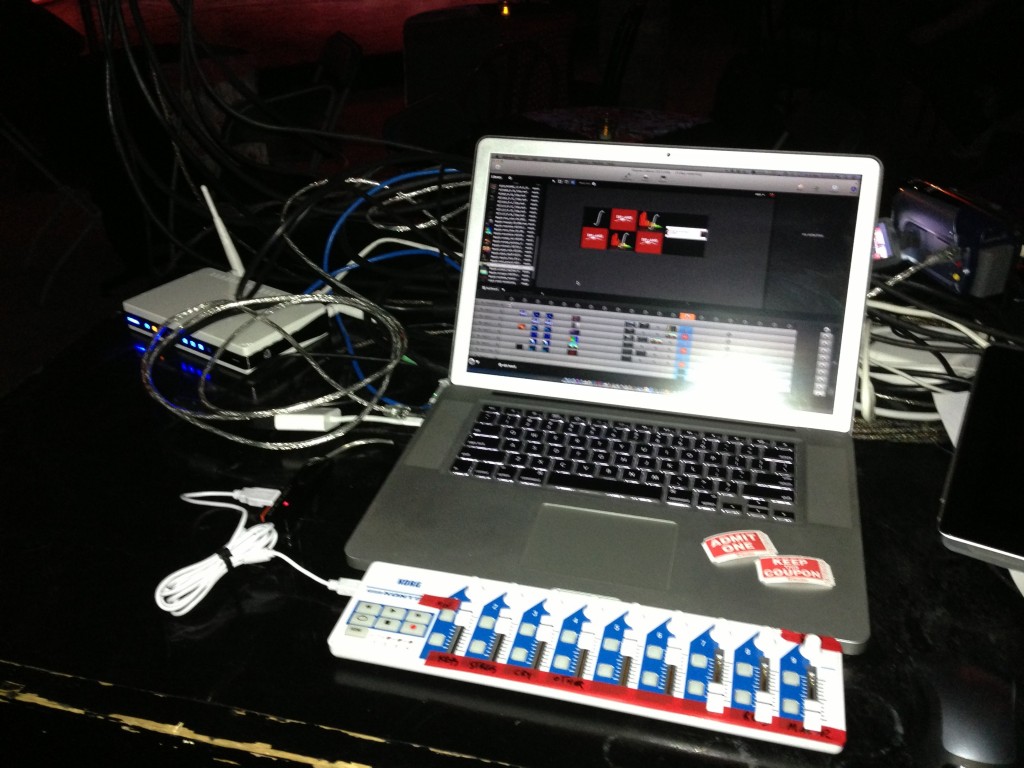 We mostly used stock VJ clips for this event, but finding and creating clips for this purpose is definitely an area we’d like to look into. We had our kinect hooked up for the event, but found that it wasn’t always effective in a projection mapped environment. There may be others ways in which it can be applied though.

With the success of the twitter bar, we’ll be definitely seeing what other “set and forget” interactive experiences we can add to evening events.

Last May, Erin Gruber, Elijah Lindeberger and I began working together on some really great theatre projection and video projects. Although it has been no secret, I’d like to formally announce ShowStages on my blog, and invite everyone to subscribe, like, and follow ShowStages as we continue to pursue new interactive video opportunities.

ShowStages is a video and design collective. We build narratives through projected media and interactive audio-visual experiences. We work in theatre and new media.

Via Flickr:
Photos from Floating Stones Theatre’s production of Echoes, at the Edmonton International Fringe 2012.

T. Erin Gruber, a collaborator of mine asked me to shoot a few photos for Echoes, a project that used projection as a narrative dramatic feature. Check out some of the stunning visuals that came out of it!

More info about the show:

"There is a new story to be told…" The trickster. The protagonist. The helping hand. Stolen relics and magical lands

Nextfest: Mother Pisslegs (She Shall Be Praised)

Nextfest: Mother Pisslegs (She Shall Be Praised), a set on Flickr.

Via Flickr:
Erin Gruber (eringruber.com) invited me to come shoot a few pictures for a show she was designing for, Mother Pisslegs (She Shall Be Praised) as part of Nextfest 2012 in Edmonton, AB.

Nextfest has a bit of a contest on, encouraging shutter bugs to take photos during the festival and submit them for inclusion in the 2013 program, with credit. Pretty awesome!

It was a bit of a challenge balancing the exposure of the performer with the projections, and some of the shots I regret locking focus on the screens. Grain was a challenge on my little D40 in such a dim environment, but some of them turned out ok! Here’s the best of the shoot.