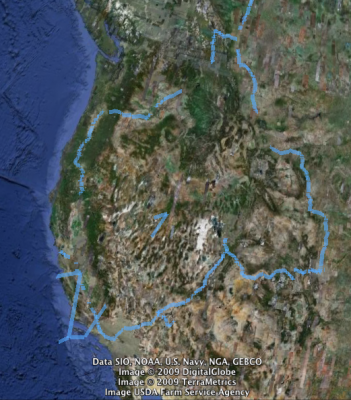 Our route through the Western US.

At different times in my life I’ve taken the time to write out my thoughts in some form. On ocassion I’ll go back to them and reread them, but most of the time it’s simply a method of organizing those thoughts in some way. Literary Catharsis, right?

This series of blog posts on my travels through the Western United States isn’t intended to be any sort of useful information. It gets to the heart of what blogging is about: a log for the web. A log of where I’ve been and how this has shaped my thoughts, with little to do with anyone else, but the thrill of knowing that it’s there, for public reference.

I will try my best to include some pretty illustrations in Google Earth snapshot form, along withs some photos, but this is mostly just an exploration of the various ideas that came to me while traveling about the United States. This isn’t my first trip to the US by any means, but it is certainly one of the longest and most elaborate. When I was about 8 I took a trip with my grandparents in their RV through many of the same destinations. Ten years later, it’s a different experience however. Even though I ended up eating fast food way too often like I did back then, I really understand some key difference between American and Canadian culture.

Certainly I have a bias being Canadian, but I don’t intend this to be a critism of the United States as much as an examination of what it means to me to be Canadian in contrast. Often times I feel like Canada is too “americanized”, which I still feel is true, but at the same time I now know that we’re far from ever being the same countries.

These are my thoughts.