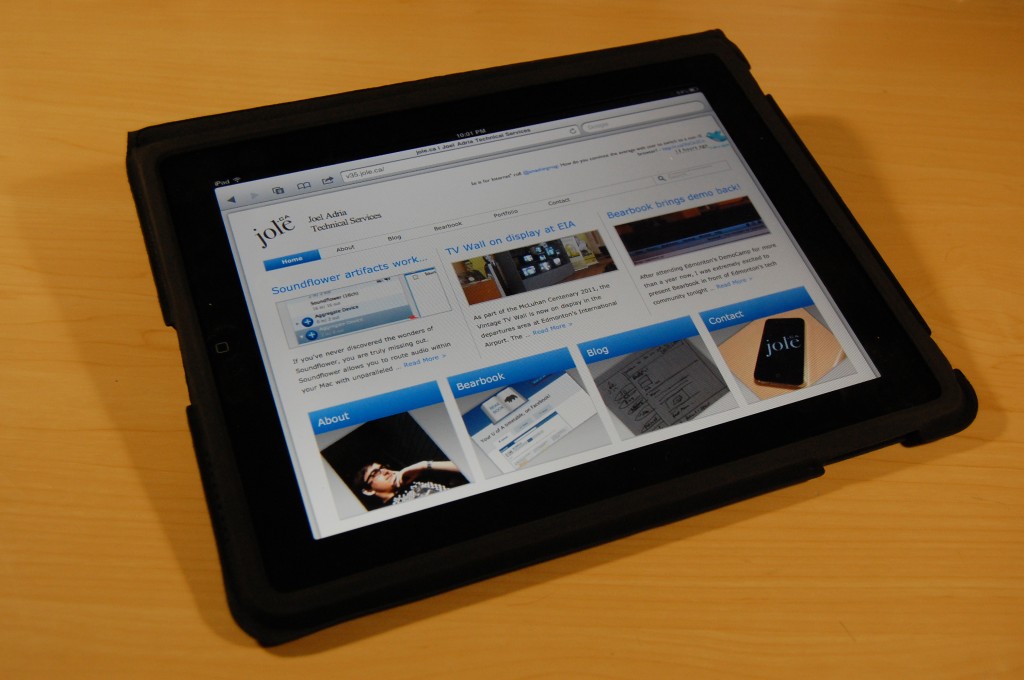 jole.ca on the iPad, while still under development

After almost a year of sitting on a fresh design for jole.ca, it’s finally here!

The first thing you’ll notice is the lighter, more magazine-style layout of the site. In some ways it is very reminiscent of my last custom-made theme for jole.ca (the one that came before aerogold), which incorporated the horizontal navigation and emphasis on non-blog content. Since then, I’ve learned more about web design, WordPress, modern web standards and conventions, all ideas that have grown out of working on WordPress sites in the past couple of years, notably with Trevor van Gorp of Affective Design.

Some of the goals for the new design were to include as many modern CSS techniques as possible, which is noticeable in the homepage where all gradients, shadows, rotations and image cropping is performed entirely in CSS. The homepage also uses the “Featured Image” feature in WP 3.0+, along with excerpts from any posts marked “Featured”. The bottom four panels are widgets that can be re-arranged and customized using a simple “Feature Page” widget I’ve bundled in the theme code.

In addition to these web-related features, I’ve also optimized it for viewing on tablets and mobile devices. Most image posts from the past 6 months are scaled so that they remain crisp when zoomed in on an iPhone, for example. The homepage was modelled after Flipboard, and serves as a “front cover” to the site. Text is well spaced and placed in narrower columns to make reading as enjoyable as possible.

One feature that is missing from the site is the Gallery, which has been officially retired. While the “jolephoto” brand is being phased out, my photography will continue to be developed on my Flickr feed. After purchasing a Pro account, I’ve unlocked a number of older pics that are available once more, and I’m working to build up Sets, Tags and Collections. I also plan to post entries on any major contributions to the feed.

Other special feature you’ll notice is better integration with social media and outside services, including the transition to Disqus for commenting. Disqus allows you to maintain a single account for all your comments across multiple blogs, and also allows for single sign-on with Facebook or Twitter.

While a refresh was certainly overdue, this shift also represents a new mission for the jole.ca domain, which is to promote the Joel Adria Technical Services brand. JoelAdria.com has redirected here for a while now, but I can now say it represents my work and brand more appropriately for current and potential clients. Be sure to take a look around, and I hope you enjoy the new jole.ca!