This is kind of “captain obvious” once you figure it out, but just for the sake of publishing this on the Web….

To have iTerm open to a certain directory for a bookmark, simply set the “Working Directory” to the path you would like to open. This seems ultra obvious, but the trick here (which I got confused about) is to not escape the path.

Usually anything shell-related requires either escaping spaces (/Users/horse/Documents/My\ Documents/) or using quotes of some kind around the string so that the command line know you’re not trying use the space as an argument delimiter. 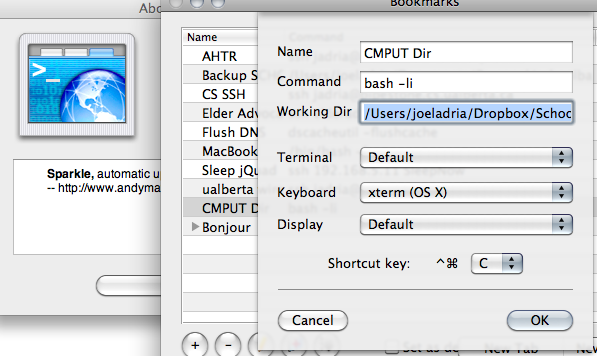 Obviously iTerm does this escaping for you, but it doesn’t actually say that anywhere in the documentation, so here ya go!

Speaking of terminal emulators for OS X, what do you prefer? I started using iTerm when I first got a Mac, since it was far superior to the Apple-supplied Terminal.app application. As of Leopard, Apple has included a much more feature-rich version of Terminal.app, although it still seems to be lacking in the Bookmark department. You can setup different window-sets and styles, but it’s not quite the same thing as being able to just save out certain commands or SSH connections easily.